Arup: One year on – sticking to your principles

How Arup’s activity-based workplace, geared towards supporting its employees in all work activities, stood the test of time – even in a global pandemic.

“It gave us that confidence to know that this is definitely the right direction. We’re designing based on data, rather than a hunch.”

Arup is a global professional services firm which specialises in the built environment. The organisation’s recent work with clients, creating exciting spaces around the world, include a dazzling waterfall centrepiece in Singapore’s Jewel Changi Airport and a new subway line for Copenhagen’s world-leading metro system. So, when the time came to moving one of its own teams to a new building in Melbourne, Australia, Arup was presented with an opportunity to practice what it preaches.

Arup’s 2018 move into One Melbourne Quarter was fuelled by straightforward reasoning – in recent years it has grown and evolved, warranting a new workplace that reflects its organisational development. Arup chose Melbourne Quarter, a new mixed-use development on the north-side of the city’s Yarra River, as its next location. The space was bigger and close to Southern Cross station, a major transport hub that made it easy for employees to commute in from all over Melbourne. But it also allowed the staff to connect with an even bigger community.

As Arup’s senior principal, Joseph Correnza, responsible for the workplace move, explains: “We felt our new space should be part of a collective of other spaces be that office buildings, retail offerings, or other amenities.” One Melbourne Quarter offered all that, plus the ‘Sky Park’, a 1,000 sqm elevated garden which serves as the entrance for employees and visitors.

In 2019 Arup was awarded a Leesman+ certificate for its new Melbourne workplace after completing pre- and post-occupancy surveys. The Leesman+ certification recognises exceptional performance in workplace design, delivery, management and operational effectiveness. Arup’s Leesman Index average score (Lmi) catapulted from 64.3 in the previous offices to 73.8 – and One Melbourne Quarter soared to 78.3, making it one of only 140 workplaces on the planet to receive the accolade.

“It was fantastic to get those results,” says Cameron McIntosh, workplace leader at Arup. “It really confirmed that it wasn’t just a honeymoon period in the new environment.”

But, one year – and one global pandemic – on, what has the Arup team learned from the process?

Designing for wellness
In line with Arup’s regional workplace strategy, developed with HASSELL, employee experience, wellness, and sustainability were key drivers of the Melbourne workplace project. The result for Arup is a Platinum WELL Certificate and a WELL Health and Safety rating, in addition to Leesman+.

According to Correnza, the two accolades are the rewards of an ongoing effort to objectively and quantitively measure every design decision that the company takes. “Using Leesman, WELL or other standards gives us another lens through which to judge not only the performance of a particular workplace but also how we might improve it,” he explains. “If you’re genuine about understanding why you’re doing something, then hopefully the rating tools become outcomes rather than drivers. That’s really the essence of ‘first principle design thinking’, which drives how the workplace is designed and then gets used.”

The data from Leesman’s primary question set and its environmental wellbeing module demonstrate the extent to which experience, wellness and sustainability now converge. The module, which ran in conjunction with the post-occupancy survey, recorded exceptional results in the areas of focus for the WELL Building Standard including air, water, nourishment, light, fitness, comfort and mind. 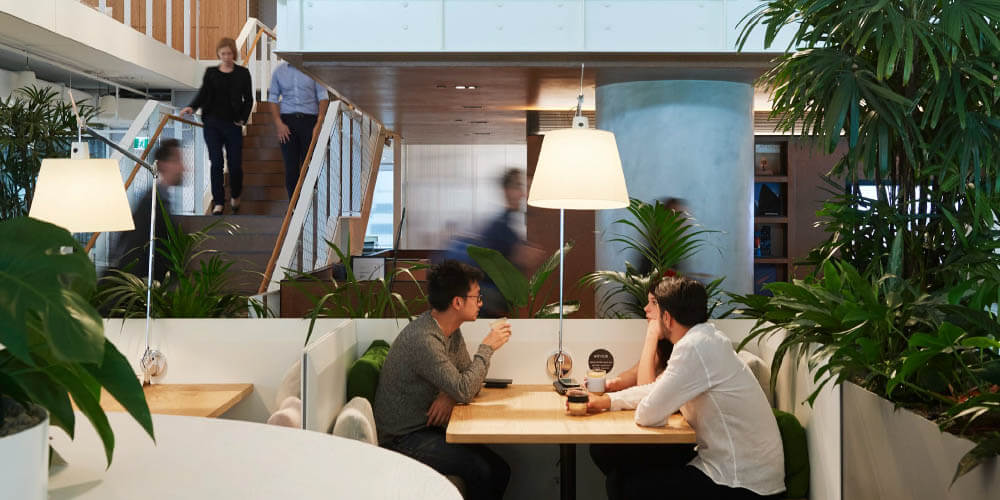 Inside Arup’s new space, more than 600 plants provide oxygenation and a fully programmable lighting system mimics the body’s circadian rhythm. There is a wellness centre and bike storage for people who choose to cycle to work. Monitoring systems for air quality and water ensure that standards are kept high, while dozens of refreshment points have been installed to encourage regular hydration.

And these efforts have not gone unnoticed by Arup’s staff, with 85.3% of employees’ developing a positive view of the company’s environment sustainability in the post-occupancy survey compared with 49.8% in the pre-occupancy study. Correnza believes that this huge improvement is down to the company being extremely open about its goals and values. He points to Arup’s commitment to moving to 100% green power, its recycling strategy, and the introduction of a ‘green’ committee that constantly appraises areas such as energy consumption. “Our people actually see those things. It’s about being genuine. We really do try to live it as part of the everyday experience in the office,” he explains.

Building a community
Arup’s tendency to be transparent has also cultivated a culture of togetherness, collaboration and sharing. Correnza claims that these values are fundamental to the success of the business because they help to drive new thinking and unlock complex challenges for clients. In fact, a big part of the brief for Melbourne Quarter was to create space that would not only allow clients and partners to experience Arup in its most genuine form but also encourage them to work in the space more often.

The previous workplace made this very difficult. It was divided into three floors that were poorly connected. Colleagues felt isolated and struggled to work together. “We suspected that this was due to the space not allowing for freedom of movement and ease of connectivity across different parts of the business,” Correnza explains.

Nonetheless, Arup had started to experiment with new workplace design concepts that boost connectivity in the office. The company had been piloting activity-based working (ABW) for a number of years to see how it might develop the kind of flexibility between teams that it needed.

It was only after the move to One Melbourne Quarter, however, that Arup was able to make a real breakthrough with ABW. Correnza and his team now had the space to put into practice everything they learned from those pilots. “One of the things we learned is that people still want to belong to a community – a smaller community, a home, a family, a group of likeminded or like-skilled people. So, we created neighbourhoods. We have activity-based working across the entire office and it’s completely flexible. No one owns a desk as such,” he explains. 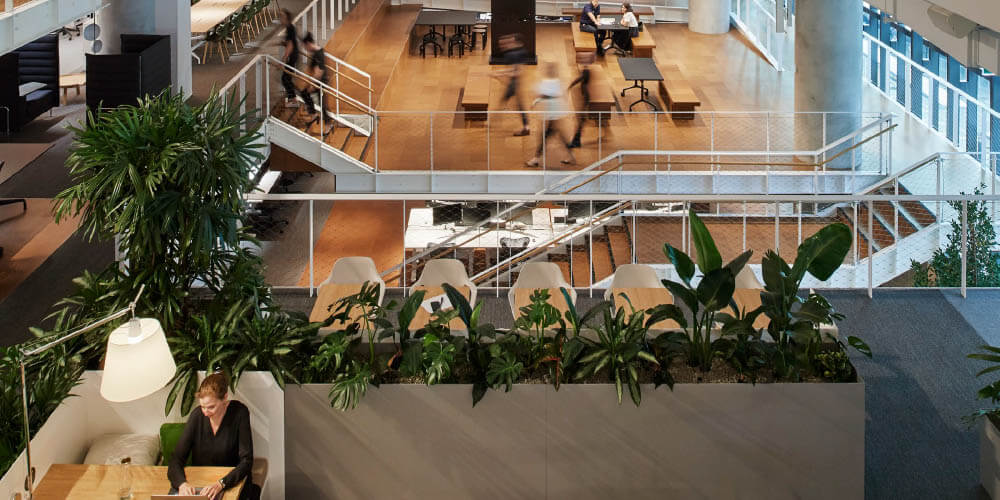 As for the design of the new space, there are still three floors but now these neighbourhoods are connected to a series of mezzanine structures via voids, steps and ramps. Colleagues and clients are able to use these spaces for informal meetings, workshops and other collaborative occasions, as well as these circulation routes facilitating informal interactions.

That’s where Leesman’s ‘pre’ and ‘post’ ability comes in. “We were really keen to gauge our employees’ sense of collaboration and understand how the space was helping them be better connected. The Leesman survey was fundamental to that,” says Correnza.

Leesman’s post-occupancy study of One Melbourne Quarter highlighted an overwhelming improvement in key areas. 82.3% of Arup staff reported a positive sense of community compared to just 66.7% in the previous space. Meanwhile, 90.2% reported that it supports the sharing of ideas and knowledge among colleagues compared with 68.4% in the old office.

Despite all this focus on community and collaborative working, the post-occupancy survey for Melbourne Quarter found that Arup employees’ concentration levels are better than ever. An impressive 84.4% of respondents reported that they feel supported doing individual, focused work compared with 63.4% in the pre-occupancy survey.

Correnza believes this is down to the ABW system. Arup’s new office contains a wider variety of space for different tasks and activities. There is a cafeteria for breaktime or casual workshops, quiet rooms for concentration, and two meeting rooms for war-room type scenarios. In the post-occupancy study, 88.8% of Arup employees reported satisfaction with the variety of workspace on offer in Melbourne Quarter.

“It’s about the diversity of spaces that are available to people – they can explore and interact with them and find out what works for them.”

Video conferencing facilities is an area which Arup expanded pre-pandemic. The organisation had increased its number of rooms with this technology, but, says McIntosh, their importance has dramatically increased over the last year.

“Even now, we get people asking about video conferencing rooms, even though they moved from a building with two to a building with 15. Previously, a lot of these calls would be phone calls and they wouldn’t bother booking a room.”

Arup’s success, says Correnza, is down to being informed. “The only way to do that is to have multiple sources of data and measurement points, and to understand exactly what you’re measuring against.” 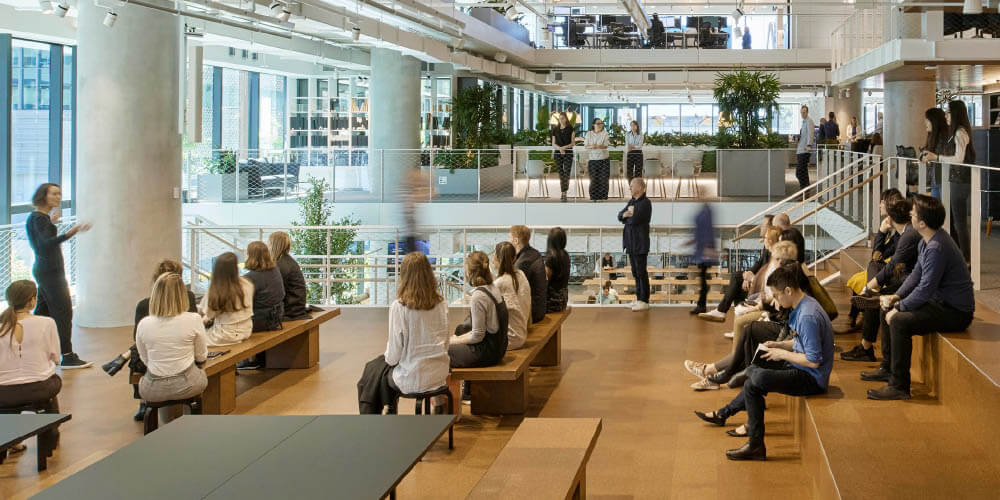 What next?
Arup shows no signs of slowing down, but the new space has given the company the room it needs to continue growing. Correnza is okay with this. He argues that the workplace, as COVID-19 has shown, should never be fixed; it needs to be “dynamic” and “hackable” in many ways so that it is able to adapt to the changing needs of the business and its employees.

McIntosh knows that in the immediate future, he will be experimenting with all sorts of workplace settings. “Our workstations, for example, occupy about 40% of our footprint. Pre-pandemic, that was extremely low, but now it’s more in line with our current expectations.”

Ultimately, McIntosh knows that the workspace has been designed so that it can evolve over the medium- and long-term. “It’s got to work on day 1,000, not just day one.”