The UK’s Office for National Statistics (ONS) is reporting that the UK jobless rate has dropped to just 3.8%, now sitting it just 0.1% above the US. Britain’s economy is the closest it has been to full employment since the early 1970s. At face value economically, this is good news, yet countless companies are finding it increasingly hard to hire the right workers.

In fact, according to a new report commissioned by The Open University (OU), the vast majority of organisations in the UK (91%) have struggled to find workers with the right skills over the past 12 months. The Open University Business Barometer, which monitors the UK skills landscape, also revealed that 61% of business leaders surveyed report the skills shortage has worsened over the past year. 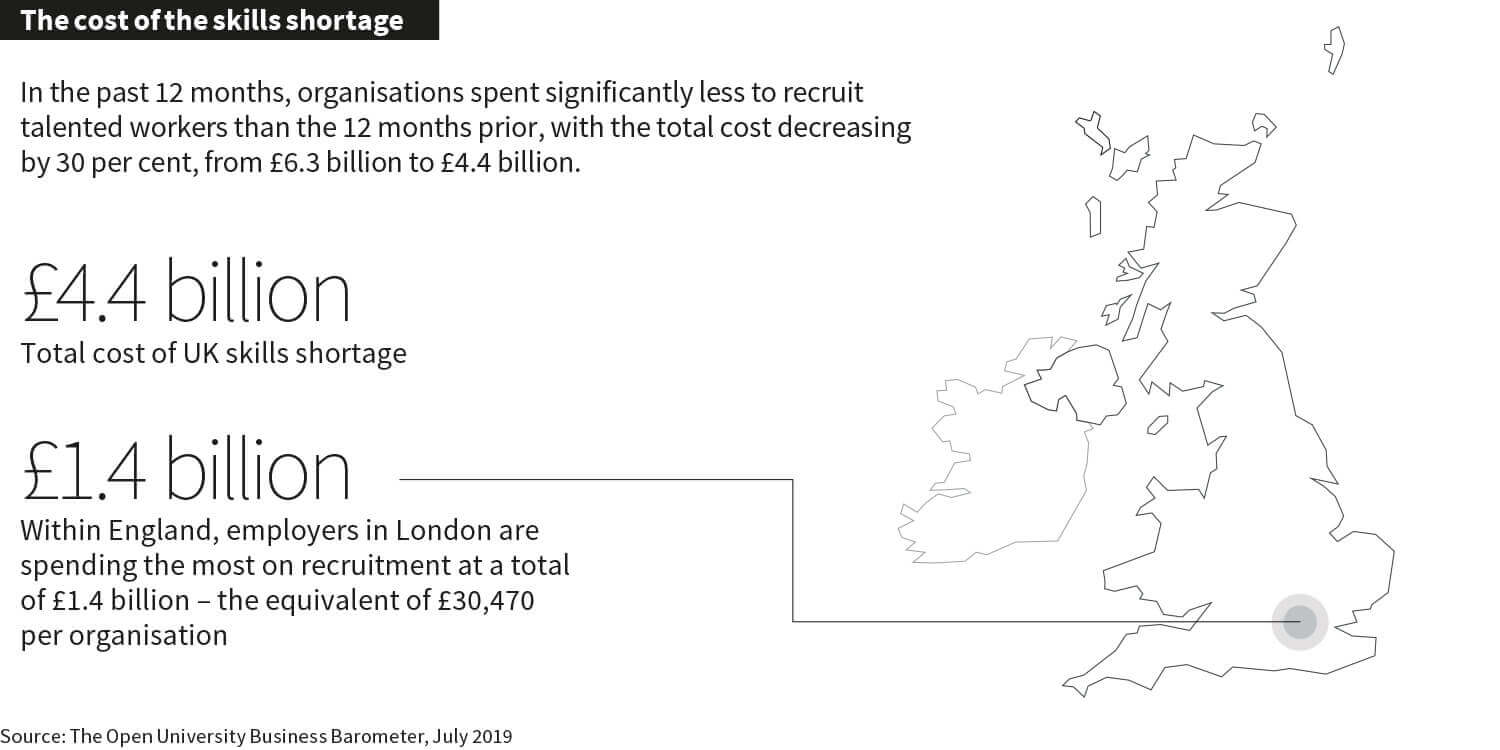 And both private and public organisations are expecting it will become even more difficult to recruit once the UK leaves the EU, whether that be crashing out or in an orderly fashion.

For engineering companies, who have recruited a large number of foreign students both studying abroad and at British universities (the latter being worth £26 billion to the UK economy) and placed them into top positions, the prospect of visa restrictions has had noticeable effects—over half of the firms surveyed by Engineering UK claim that these hard-to-fill vacancies have in turn caused noticeable fiscal consequences.

Additionally, The OU research revealed more than half of senior business leaders surveyed (53%) expect the situation to deteriorate over the next 12 months. More than two in five (44%) expect their organisation to struggle financially in the next year, indicating that the issue needs to be urgently addressed.

The Financial Times reviewed official and other data and identified five sectors of the economy that are grappling with the most acute labour shortages: Hospitality, Information technology, Software engineers, Construction and Healthcare.

But this list, focused on the UK skills gap, makes for frustrating reading when just a few hundred miles away across the English Channel, Skills Panorama an organisation focused on labour market issues in the European Union, is reporting the Netherlands has a skills surplus in almost all of the healthcare areas in which the UK has shortages. 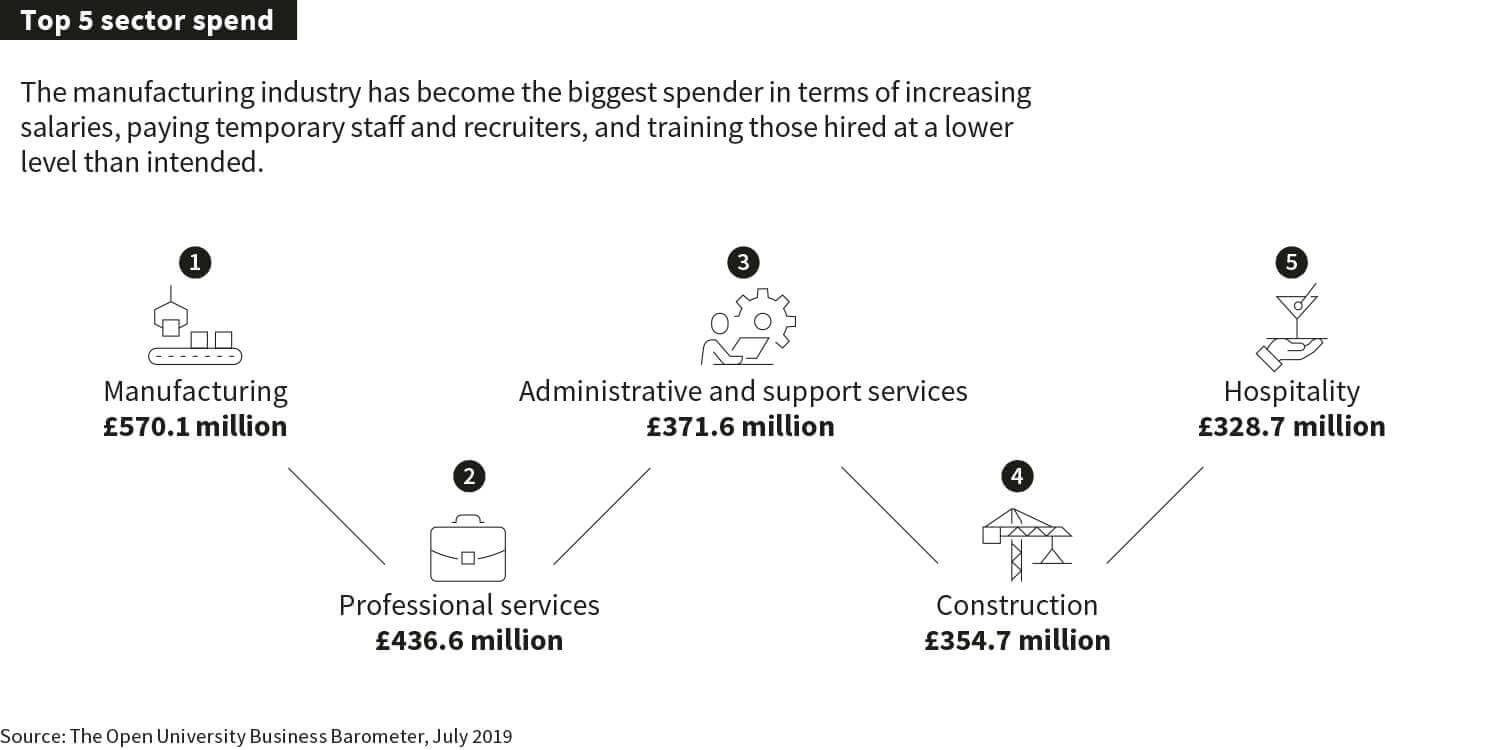 Factors universally affecting developed countries, do, to an extent, dictate these shortages. Guy Douetil, Managing Director at Hickey & Associates, who advises global organisations on location strategy, economic incentives and labour analytics, claims: “modern consuming has seen a huge growth in online retailing, causing a high demand for lorry drivers and warehouse operators. The shortage in healthcare workers can too be understood relatively simply. An aging population warrants a larger healthcare workforce—and due to sophistication in medicine and increasing use of digital and nanotechnology—the healthcare profession needs to recruit a new range of skills.” So, in this case, is it not only about a shortage of healthcare workers and more about a shortage of the appropriately trained healthcare workers?

For over a decade Britain has suffered more acutely from a skills shortage than any other member of the G7. Is the problem much further upstream? Despite increased investment in schooling during the 1990s, Britain’s educational performance is notably mediocre in comparison to nations of similar economic affluence. A number of reports published recently have found that one-fifth of Britain’s adult populace still struggle with basic literacy and numeracy skills—a clear indicator that the problem is deeply systemic.

Perhaps the problem extends further than a shortage of skilled workers and instead is more about the skills being in the wrong place. So, if the skills won’t come to the organisation, should the organisation go to them? Guy Douetil again: “I’ve spoken to companies who have said they can’t find anyone under the age of 35 to come to certain remote locations. So, they’re having to make different locational decisions. Rather than a one location strategy, companies are considering a two-location strategy, where you have an inner-city site which attracts the ‘younger’ population, in addition to a more suburban or rural business park.”

Manufacturing companies have reportedly been worst hit by the disinclination of graduates to want to base themselves at remote manufacturing campuses. “For many years manufacturing has struggled to introduce and entice new workers to the industry,” said Keith Barr, CEO of L2L, a lean manufacturing software company. “Unfortunately, the industry hasn’t fully explained the dynamic, technology-driven environment of the modern plant floor. With Gen Z just moving into the workforce, we need to encourage their participation in modern manufacturing. If we don’t, I’m afraid the industry will be hit with the negative effects of the Silver Tsunami.” 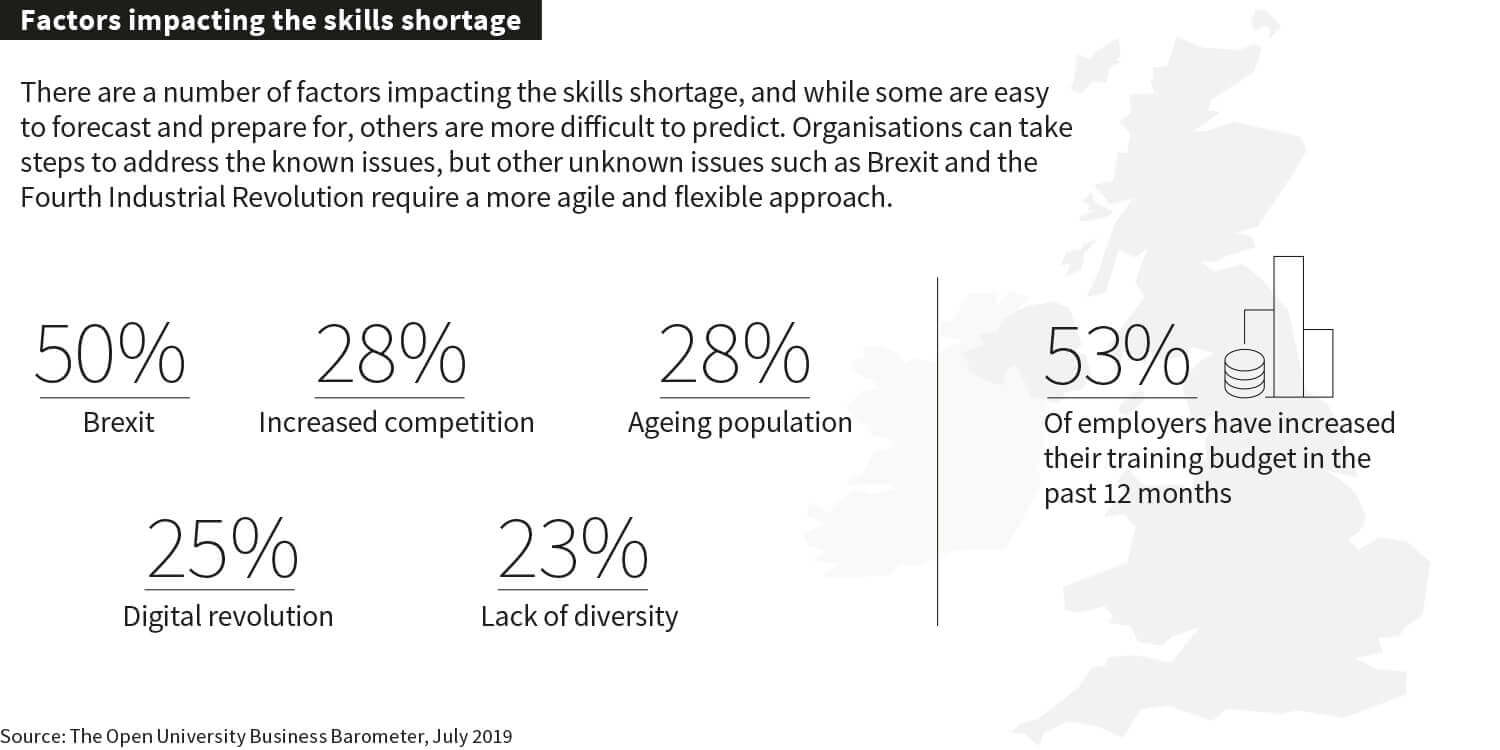 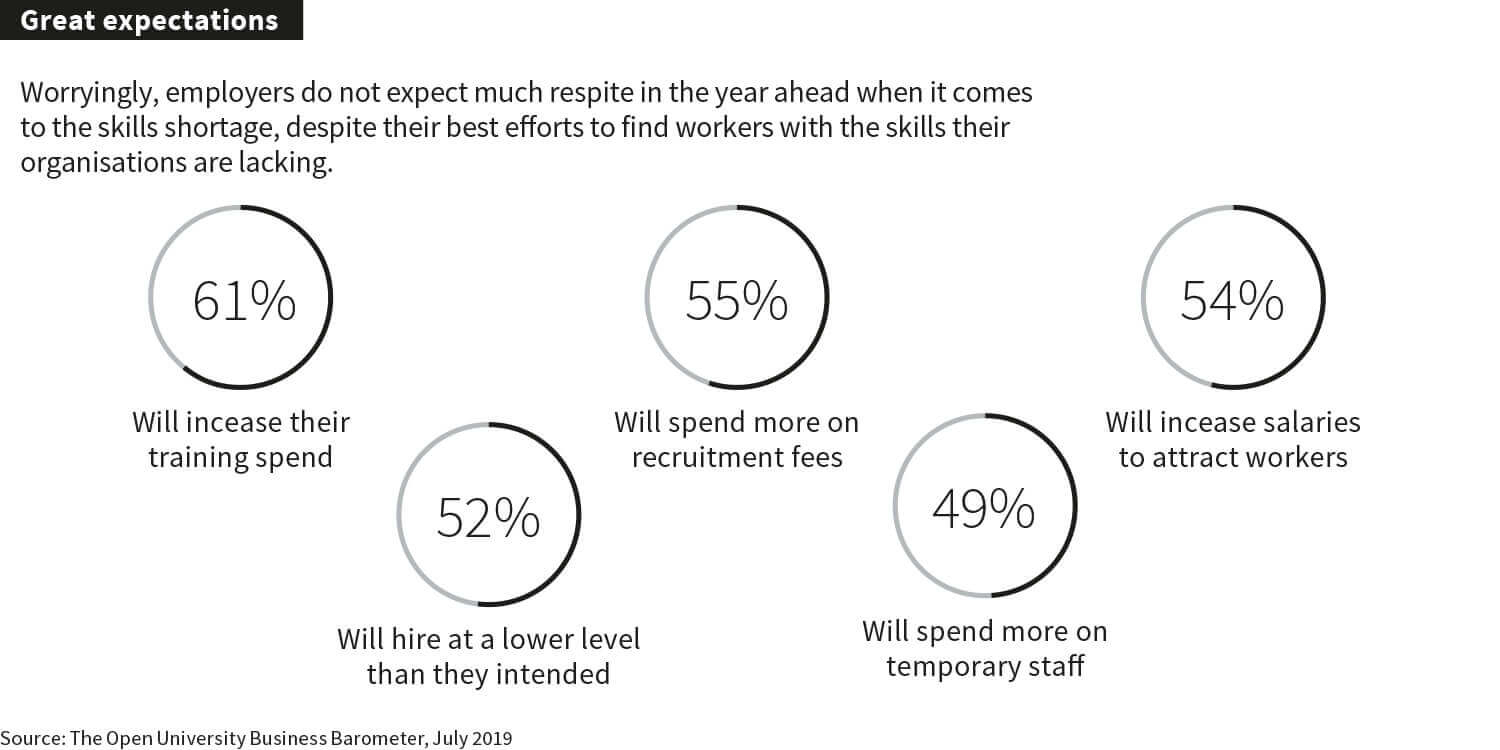 But what are the alternatives? British business mogul and inventor of the Dyson vacuum and air-blade dryers, Sir James Dyson, who has been vocal about the growing skills shortage, opted for a different approach to filling engineering positions in his company. In 2017, the Dyson Institute of Engineering and Technology was built on Dyson’s technology campus in Wiltshire, offering fully-funded bachelor’s degrees to a select number of students each year.

Whilst the Dyson Institute sets an important precedent to companies suffering from a skills shortage, training your own graduates is not yet a trend amongst the UK’s industry elites. Instead, more industrial manufacturing giants are in effect outsourcing their R&D to ‘partner’ universities, where sponsored PhD projects see those activities happen on a university campus rather than a manufacturing campus.

So, could this lack of appropriately skilled workers usher in a new age of workforce? Perhaps organisations will be forced into investing in AI and robotic automation simply because they can’t recruit the highly skilled positions they would prefer to be filled by people. However, whilst the notion of whole industries becoming fully automated is still a dystopian nightmare, until the skills shortage is rectified businesses will continue to suffer.