In 2002, shortly after 9/11 and the ensuing ‘War on Terror’, this statement made headlines around the world. It was the then US Secretary of State, Donald Rumsfeld’s, press briefing response to a reporter’s questions about the lack of evidence linking the government of Iraq with the supply of weapons of mass destruction to terrorist groups.

While the initial reaction to his remarks was one of confusion, over time the consensus towards them has shifted. Any venture, from business to athletic, requires a risk assessment of the things that are known and those which are not known. Preparation is almost always key to overcoming challenging circumstances— but how can we mentally prepare for the things we don’t yet know that we don’t know?

Endurance event athletes contend with these uncertainties and prepare accordingly. Open-water distance swimming in particular is a sport with a huge number of unknowns.

Dr Nick Murch is a highly accomplished open-water swimmer who swam the English Channel in preparation to swim the length of Lake Geneva. That endeavour ended up taking him 32 hours—eight hours longer than he’d planned. He is also a consultant in acute medicine so has a deep understanding of how the body and mind react to swimming in bitter temperatures for hours on end. Dr Murch spent two years mentoring Workplace and Change Consultant, Steve Henigan, ahead of his attempt to swim the English Channel in late July 2019. We talked to them both about how to mentally and physically prepare for the unknown.

The first of these uncertainties is that your actual swim date is unknown. Because the swim is contingent on weather conditions, swimmers are given a two-week window and will only be told a few days before when they will actually be swimming.

Nick: “That’s hard because it means you can’t guarantee who’ll be on your support vessel; ideally it would be the coach you trained with and the crew you know, but there simply are no guarantees. So, from the outset, the swimmer has to mentally prepare for perhaps having a less-familiar set of faces there helping them get through it.” 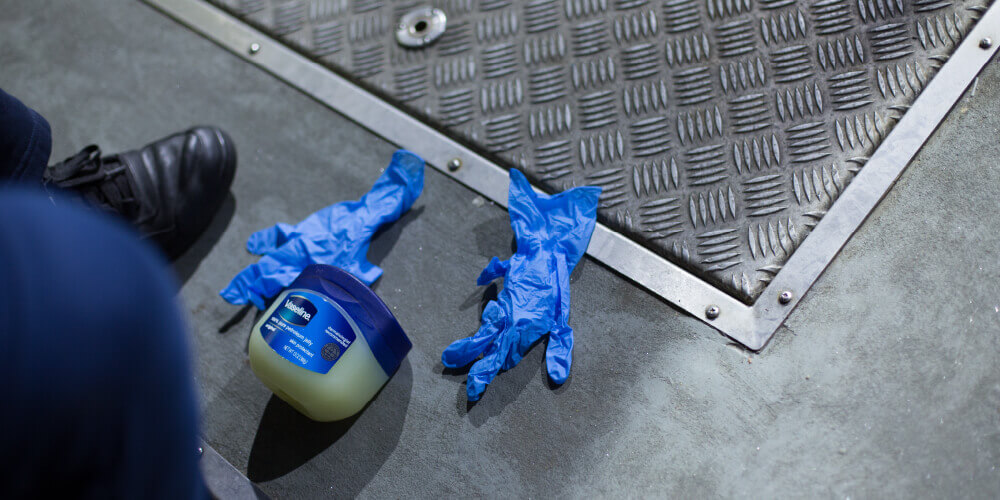 Steve learnt to focus only on the things he could control. “I’ve done triathlons, and there I would focus on making sure the bike was set up correctly and that my helmet was on comfortably. I can’t control what the weather is going to do on the day or how fast other people are going to go, all I can do is be in complete control of the things that are relevant to me. I applied the same approach.”

Another of the known unknowns is water temperature. The average training for a Channel swim is two years, and in theory this training has to happen year-round, although in the winter you can’t always train in the sea because it’s just too cold. For Nick, that temperature acclimatisation was fundamental: “That’s a key thing to prepare for because even in August the Channel could be just 14-16-degrees. So, cold showers, ice baths, sleeping with no covers on and the windows open. When I was training I would drive to work with my heating off and the windows down on a freezing day.” For Steve, this was an iterative process: “the whole two years of training was about learning, so on the day I was focussed on winning.”

For Steve, this was an iterative process: “the whole two years of training was about learning, so on the day I was focussed on winning.”

Around early May swimmers start doing ‘double dip’ swims—get in for 20 minutes at nine degrees, get back out for half an hour and repeat. In the months leading up to the swim, training time ramps up: most people train seven hours on a Saturday and six hours on a Sunday. The average swimming time for the Channel is about 13 hours, so if you’re following this regimen you know you’ve done the swim in two days.

Swimmers are also contending with tide patterns and Channel shipping traffic— it is one of the busiest shipping lanes in the world. Steve also risked being confronted with schools of jellyfish. “So, I went on a training camp in Majorca and was actually looking for the jellyfish to sting me. I wanted to experience what that feeling is beforehand—how long it lasts, what it affects. It was about preparing myself for as many situations as possible.” 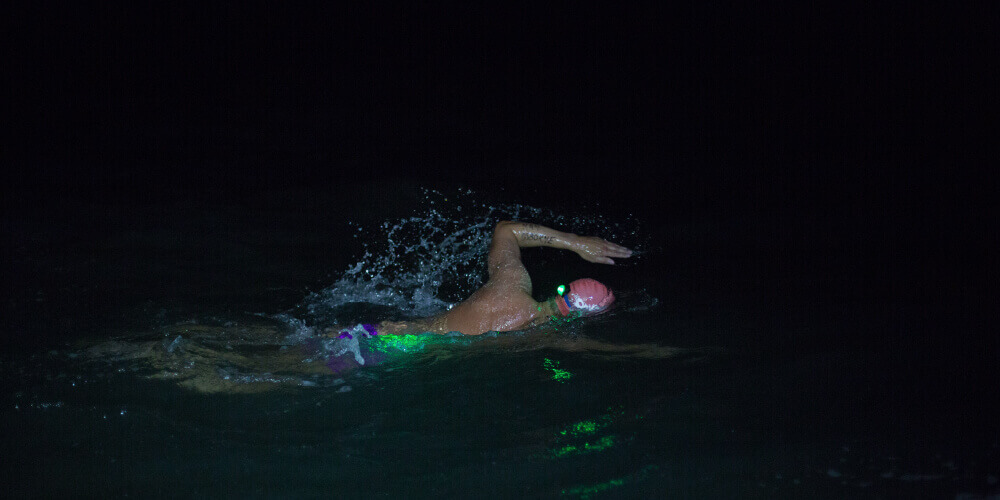 Nick also insists his swimmers do a practice night swim, “because swimming in the dark is very disorientating. And I make sure they train on empty. Halfway through the swim they will ‘hit the wall’—it’s essential that they’ve experienced this before the ‘day’ and overcome it.”

Nick uses a QI (quality improvement) training methodology and PDSA (plan, do, study, act) cycles. The outcome is similar to marginal gains in cycling, with every training session being analysed for small components that held the swimmer back. “And, since swimming the Channel isn’t a race, as much as anything it’s about avoiding failure. You have to know what mini-things might affect you, so they don’t throw you off during the real swim.”

“Everything from food to your swimming hat will all have been tested and vetted during your numerous training sessions beforehand, so that on the day you are absolutely confident that everything you can control is not just under control, but that it’s the best possible set up to ensure success.”

Of course, the ‘unknown unknowns’ that swimmers can still come up against then become known knowns for others. For Nick that challenge was paranoia on Lake Geneva. “Being in your own head for 13, 14, 15+ hours can be quite an isolating experience. Then the people on your team boat start pointing at you and talking about you and I found myself getting quite angry with some of my team. They were sitting there in front of me having a cup of tea or a sandwich and I had nothing, no enjoyment at all at that point.”

“It’s something that’s very difficult to train for; you don’t know how you will react until you’re in the situation, but for me it was a complete surprise.” To mitigate against the paranoia, swimmers stop once an hour and talk to the people on the boat, take on food and a quick drink.

Undoubtedly, swimmers are not only contending with the mental endurance. Physically, the first change is that the swimmers’ core temperature drops sharply. They become slightly hypothermic as their bodies try to divert blood to muscles and major organs. Hands and feet turn blue, go numb and become swollen with water. Most swimmers get bloated and get a salty tongue, making it hard to taste anything. Some swimmers even get motion sick while swimming.

Nick: “The human body can only take on a certain number of calories per hour. Distance swimming is like being on an extreme high fat, high protein, low carbohydrate diet; you become ketogenic breaking down fatty acid instead of carbs. That can really disorientate people because if their brain isn’t getting enough energy they can start hallucinating, which I’ve had on a number of my swims.” 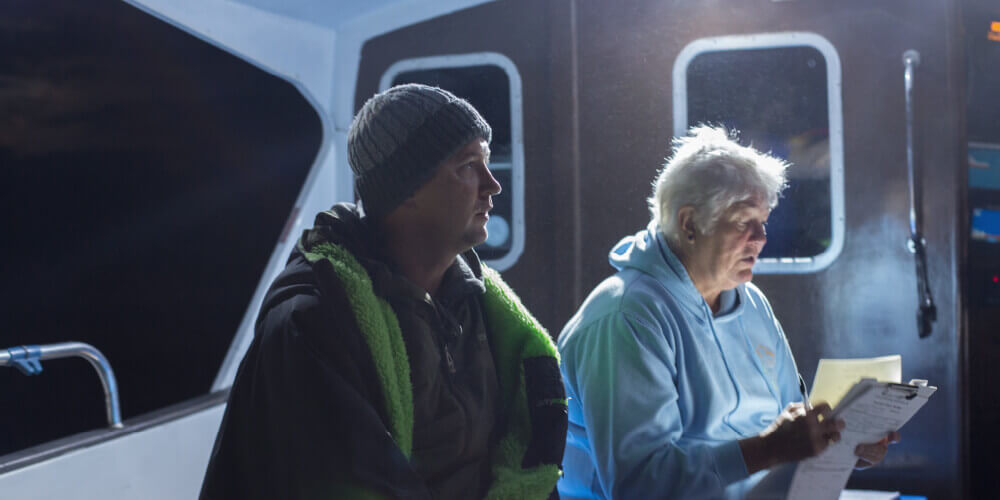 With all of that going on, at what point do swimmers stop? Nick highlighted this as another problem: “It’s rare for a swimmer to stop themselves. They’ve invested a huge amount of time and money. That’s why it’s essential to trust in the crew—that they will pull you out if you get unwell during the swim. When I swam Lake Geneva, which is about 43 miles, I was hallucinating and hypothermic, but I wasn’t about to pull myself out. Thankfully my crew did help me get through it, but it can be hard for the coach in that position–to discern when to call it quits, especially if that means ending someone’s dream.”

The determination to push your body to the limit was echoed by Steve: “If you want to pull me out, you’re going to have to come in here and get me.”

But Nick is clear that there are certain strong markers to look for. “Firstly, checking how they’re feeling in themselves: Are they cold? Can they pass urine? Are they coughing excessively? And also check in with their mental state, see that they are in a positive mindset. We make sure that someone on the boat is watching them at all times. If the swimmer starts veering away from the boat repeatedly, then they may not be getting enough blood to their brain.”

The flip side is some swimmers quickly fall prey to negative thoughts: you can’t do this, you’re a fraud, you shouldn’t be here. Some people give in to these voices in the first one or two hours. They’ll typically develop a shoulder injury that isn’t there—they’ve talked themselves into having a bad shoulder, so that they can get out with their reputation intact. The coach has to try to determine whether these injuries are real or if he or she just need to motivate the swimmer through this point. 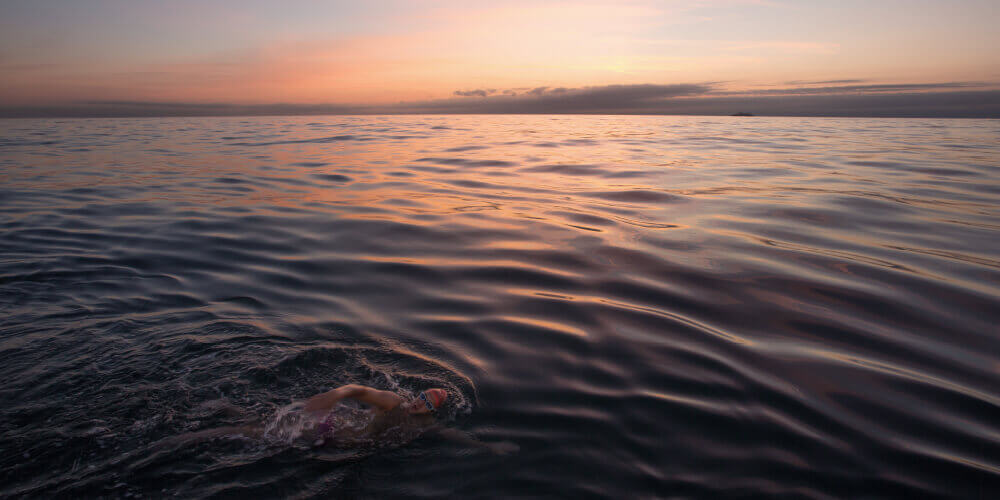 For the majority of swimmers, the final third of the swim is where these doubts become the most intense, with Nick aptly naming it: “the corridor of uncertainty.” This final leg can be profoundly demoralising, as people have become visible on the coast, yet the swim is far from over. According to Steve: “this is where the swim mentally begins.”

The parallels in dealing with uncertainty in business might not seem obvious, but Nick feels the opposite: “There are so many: take chances and try different things, but acknowledge that you won’t be able to simulate every experience. Keep a good team around you who will tell you when it’s time to let a certain project go or push you to keep fighting through the difficulties to see the project achieved.”

For Steve, now an official solo English Channel swimmer, many are already familiar to strategy consultants: “Break big goals down into manageable chunks. Practise various outcomes. Find and place trust in the predictable portions of the situation and lastly, focus your evaluation of input initiatives based on the positive impact on the output, however small.”
English Channel swimmers prepare for failure, success, and everything in between, yet businesses too often see planning for failure as an admission of weakness that would unsettle employees and investors alike. In today’s volatile business climate, there is much to learn from those endurance athletes.