In 2014, Just One Ocean was established as a conservation charity to protect the ocean for future generations. Witnessing the sheer scale of the problem, while working as a marine photographer and film maker, provided the impetus I needed to try to do something about the many issues facing our ocean. As my studies into the issues progressed, I became increasingly aware of how anthropogenic activity is changing habitats, destroying ecosystems and reducing biodiversity. With one of the biggest problems was plastic pollution.

My journey in the world of plastic pollution really all started in 2009, when I joined the Plastic Oceans Foundation following a meeting at the launch party for the BBC series, LIFE. People were beginning to talk about a huge floating island of plastic in the Pacific twice the size of Texas. Was that possible? Why couldn’t we see it from space? Whilst this media myth perpetuated for some years, the scale and impact of the ‘plastic problem’ was still largely ignored.

Trying to encourage supermarkets and plastic producers to change their ways for the benefit of the environment was a hopeless task, but one that we enthusiastically and, often frustratingly, embarked upon. This was the beginning of an eight-year journey of fundraising and film making that culminated in the production of the documentary film A Plastic Ocean in 2017. It was a film that would open the eyes of the world. The years that followed saw a surge in public awareness. Not only was there a rise in grass root organisations and environmental activism, but the problems facing the earth’s oceans had become part of public discourse.

You only have to open a newspaper to realise that plastic pollution has become the hot environmental topic of the last few years.

However, while there has indeed been a rise in awareness, our plastic consumption continues to rise. Global production in 2018 was 359 million tonnes, an increase of 3.1% on the previous year. As the population of the planet increases, it seems that our reliance on plastics, and single use plastics in particular, will continue to spiral out of control.

It could be argued, very simplistically, that the plastic pollution problem comes down to two things: poor or inadequate waste management and human behaviour. The former will need to be resolved by changes and investment in processes, science and technology, by the development of viable alternatives and new innovation, as well as by the introduction of legislation to promote extended producer responsibility. The latter requires fundamental changes in our perception and behaviour both as producers and consumers. Let’s examine those ideas in more detail.

We need to invest in science, because it is critical in developing policy and bringing about change. 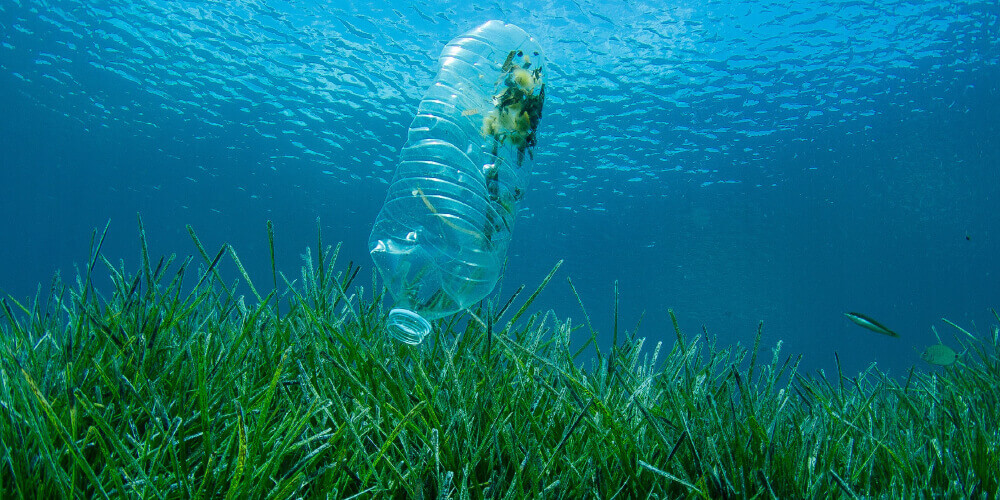 The biggest challenge we face as conservationists and scientists is what we don’t know, rather than what we do know.

From the data we have available, we know that approximately eight million tonnes of plastic is entering the oceans, mainly through rivers, and mainly in certain Southeast Asian countries, but that’s not to apportion blame in any way, because we’re all as guilty as each other. But herein lies the problem. We only know where about 1% of that plastic actually is at the moment. We are also unclear of what the impact is going to be on both ecosystems and human health. At the same time, one of the biggest problems with scientists (and I say this as a scientist) is that we are very good at writing stuff that only scientists can read. If we’re to make full use of science, we have to educate and communicate with the wider circles. Actually, this pretty much sums up where Just One Ocean fits in: getting involved in research; pushing communication; sharing scientific knowledge; and educating.

Legislation and government policy also need to move to a more strategic level. The knee jerk reactions we see, such as bans on straws and cotton buds, enable government officials to avoid scrutiny but they are never going to address the bigger problem.

What we need is a strategic solution that invests in science, innovation, alternatives, education, and public engagement in an holistic and integrated way.

Trying to change behaviour is a bit like trying to change culture. Culture is often described as ‘the way we do things here’ and deep-rooted,traditional beliefs are not easy to break down. It can take time and there is usually a lot of opposition.

However, the ‘plastic addiction’ culture is relatively new and therefore we can change behaviour if we find the right angle. Take, for example, the value perception of plastic products. Around 40% of the plastics we use are for packaging that our brains tell us we have not paid for. When you buy a bottle of water, you believe you’re paying for the water, when, in fact, you’re not. The actual cost of that water could be up to 500 times more than the water out of a tap. What you’re actually paying for is a process of manufacturing, marketing, transportation, distribution and retail overheads. We throw away our bottles with complete disregard because they are valueless. From an economic perspective, the most sensible thing to do would be to throw away the water and keep the bottle.

One solution to this ideology could be the circular economy model. It is a process that recognises the need for a healthy and efficient economy, but incorporates a resilience that will provide environmental and societal benefits. While single use plastics remain valueless to the consumer, a linear economic model will dominate their thinking. There are some that would argue that education of environmental concerns will be sufficient to change opinion and behaviour, but I remain sceptical. The family who throws their rubbish into a river in a remote part of Indonesia, because there is no alternative means of collection and disposal, are unlikely to change their behaviour because of a concern for passing dolphins. By adding value to those products, we can change the way that they are perceived. Most of us don’t like change and we often need an incentive to do something different. There is nothing more incentivising than money, both for producers and consumers, both of whom would benefit if the circular model could be applied.

So, what about business and industry? Where do they fit in? I think that there are very few businesses that have failed to recognise the increasing unease reverberating around the world about the state of the environment. That said, I think that many more will have failed to grasp the potential opportunities that this situation offers. Sustainability should be embedded in the strategic plans of corporations and industry from the outset. Ultimately, business should not be about how much profit you make, rather, how you make it. 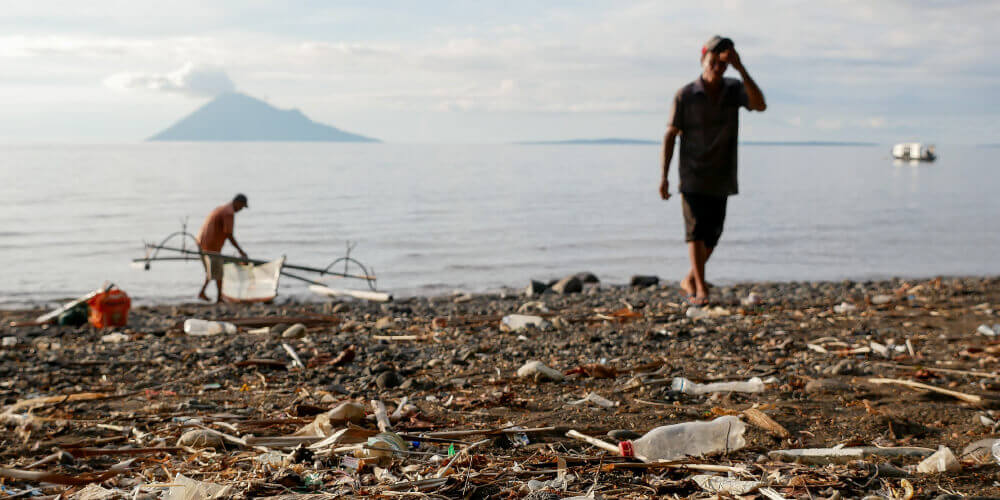 There’s an unequivocal moral obligation to do the right thing for future generations but, with consumer sentiments changing, there is also a sound business case to prioritise environmental sustainability.

What will become increasingly apparent is that businesses who fail to adapt and adjust to what’s happening within the natural environment are going to fall behind. Because that’s how a successful business operates – by staying in tune with consumer sentiment and championing necessary change and innovation.

Change is imperative and we still have an opportunity to resolve this problem and change our attitudes towards single use plastic. We have to, because the sobering reality is that without the ocean, life on earth cannot exist – and that includes us.

The impact of COVID-19 on the ocean

Discussions around single-use plastics have, understandably, taken a back seat in the face of a planetary pandemic.

For many, the one silver lining of COVID-19 was the respite the planet would get from a significant decrease in global travel. But while the Earth is getting a much-needed breather from air pollution, plastic pollution has grown exponentially.

Personal Protective Equipment (PPE), though absolutely crucial in our fight against coronavirus, is being found on ocean beds and washing up on shores at an alarming rate.

Between February and April 2020, according to Gov.UK, over 761 million pieces of PPE was circulated around the UK, and millions have been discarded in the natural environment. 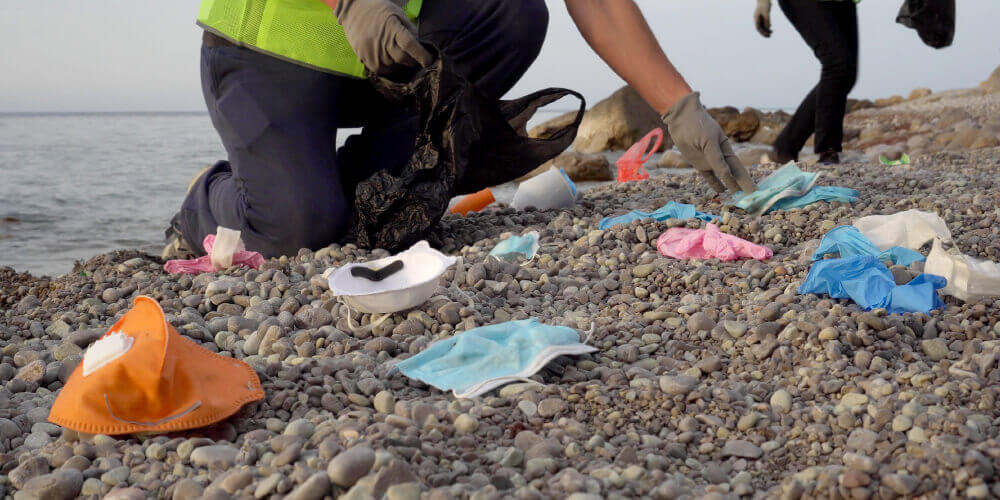 According to current figures, if just 1% of the masks that have been circulated in the past several months were thrown away, 10 million masks would end up in the ocean. Many of which are non-biodegradable, non-recyclable and take roughly 500 years to degrade.

But the problem doesn’t end with PPE. The polymers used in this lifesaving equipment is also found in take away food packaging and PET in single-use plastic bottles, which are being manufactured at an unprecedented rate during this crisis.

Worse still, plastic manufactures have monopolised on people’s fear of spreading the disease, and have pushed for suspensions on environmental measures which have been years in the making. But the issue with emergency easings of restrictions is that, they are rarely withdrawn after a crisis has ended.

Conservationists around the world are fearful that these temporary rollbacks could become permanent – undoing years of campaigning for reform, something we simply can’t allow to happen.